The t-shirts changed color with your body heat but at that time the technology was only young and the magic dyes washed out after only a few washes so it disappeared as fast as it hit the 90s scene.

Hypercolor shirts where an amazing invention in the early 90s but they where a little ahead of the technology.  Now all that technology has caught up and the invention of Shadow Shifter uses it to provide a newer and vastly improved version with new and better colors. 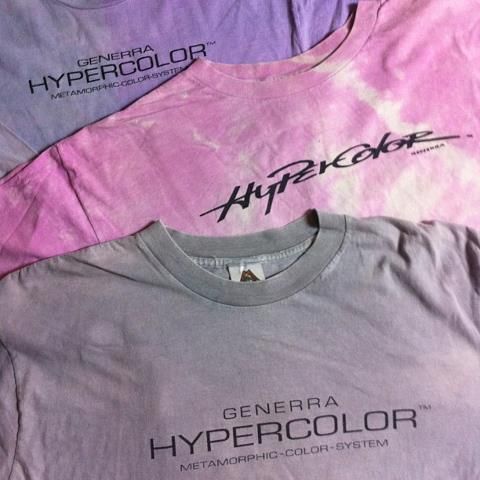 Shadow Shfiter the next generation

In 2005 a guy from England living in the U.S.A. took up the challenge of manufacturing these very popular color changing shirts without the issues of the Hypercolor shirts and after 5 years of research he developed Shadow Shifter.

The new exclusive Shadow Shifter shirts are fully machine washable and machine dryable with deeper color changing effects than the 90s Hypercolor shirts.  Another great advantage is that the Hypercolor shirts would stop working after being dryed at high temperatures in your tumble dryer.  The new Shadow Shifter color changing shirts have specially developed damage resistant dyes to high temperatures of heat so they can be dryed at high temperatures and screen printed with no special instructions.  They can even be heat presses which is at a higher temperture than screen printing curing.

Shadow Shifter is manufactured in the U.S.A. to maintain high quality with 100% ring spun cotton t-shirts.  The old Hypercolor shirts only used 100% jersey cotton and where manufactured in India.

They are great for teams, events, sponsership, groups, clubs and general retail.